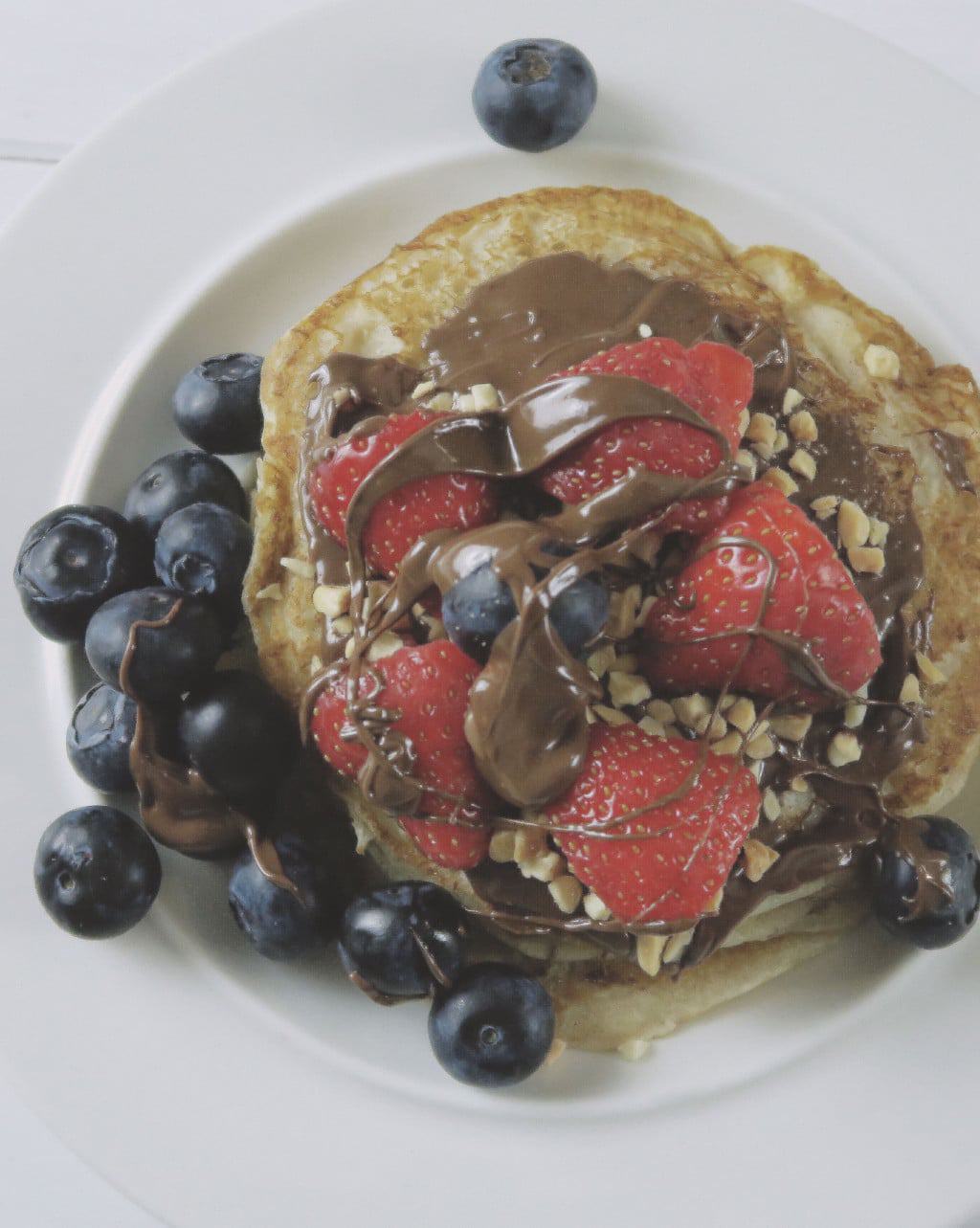 When you have a child with an egg allergy, you spend a lot of time googling things like — ‘How to make egg free Royal Icing‘ and  ‘What is the best eggless pancake recipe EVER?’.

It’s all a bit daunting to begin with but eventually you realise that there are some fabulous ‘free-from’ recipes out there, that you can modify to suit your family’s taste buds.

My alternative for egg free icing has been such a hit and I’m happy to say that the eggless pancake recipe — that we’ve perfected over the last few years — is now a firm, family favourite too.

We make them on pancake day, high days and holidays; for special celebratory breakfasts and on Christmas morning.

There’s something very comforting about creating a big stack of fluffy pancakes, in the knowledge that the entire family will dig in and share them.

There have been lots of variations on a theme; lemon and sugar (for me particularly — I’m a bit of a traditionalist when it comes to pancake toppings).

Honey and banana is one that the twins particularly like and my big (man-shaped) boy prefers his with maple syrup and bacon.

But — all other flavours aside — the one topping that we all agree on (and the one that is brought out on the most special of occasions) is Nutella, with chopped nuts, strawberries and blueberries.

It is a DIVINE combination.

You’d think — without any kind of liquid soaking through the pancake stack — that they would be a little too dry but they’re perfect.

The fruit cuts through the sweet chocolate and the nuts give the whole thing bite and texture. The whole combination is a joy for the tastebuds.

And the pancakes themselves? Well, for anyone who’s tried them, the comment is often this:

WOW. You would absolutely not know that they don’t contain egg!!

Which is brilliant; as it means that Bertie never feels as though he’s missing out. In fact, it makes me wonder why you’d ever make pancakes with egg when they taste this good without them.

Plus the addition of Nutella elevates these humble pancakes to something extra special.

Chocolate for breakfast is such a treat when you’re 4 years old (and 44 years old for that matter). But did you know that one portion of Nutella (a 15g heaped teaspoon) is only 80kcals?!

And, believe me, a heaped teaspoon goes a LONG way.

So nice to know, that something that the boys perceive to such a delicacy is actually a great addition to a balanced breakfast.

And amazing to think that fellow Britons have been enjoying Nutella — in the same way that we do —for the last fifty years!

Let me tell you a little story…

The Story of Nutella

In 1940s Italy, there was a humble patisserie maker named Pietro Ferrero.

He spent his days making mouth-watering delicacies, for the people of Farigliano.

But, as Europe was in the throes of World War II, rationing meant that cocoa beans were in short supply.

So to extend his meagre chocolate rations, Mr Ferrero mixed toasted hazelnuts with cocoa, cocoa butter and vegetable oil. He popped the mixture into loaves, which he called ‘Pasta Gianduja’.

In 1949 — due to popular demand — Ferrero altered the original recipe so it could easily be spread onto bread.

The chocolatey mixture became known as ‘Supercrema Gianduja’ and remained so until 1964; when it was introduced to the UK and renamed Nutella, to reflect one of the main ingredients.

As a result of his quick thinking — and creativity —he produced the UK’s number one breakfast spread (and also my favourite chocolates).

But apologies — I seem to have got myself totally distracted by the thought of Ferrero Rocher!

Without further ado, let me share our favourite celebratory breakfast with you.

Our Best Eggless Pancake Recipe EVER

Method:
Sieve together the flour, cinnamon, baking powder, in a large mixing bowl, then add the sugar and salt.

Mix the milk with the oil, water and vanilla extract.

Slowly stir the wet ingredients in with the dry. Don’t over-mix (and don’t worry too much about lumps, that’s perfectly normal).

Set aside for a couple of minutes.

Next, heat the rape seed oil in a pan over medium-high heat. When it’s hot, pour it into the batter mix and stir in.

Return the pan back to the stove and after a minute or two (or when the oil is hot) pour a disc of batter into the pan (around two tablespoons of mixture).

Mine are usually about 10cm in diameter or thereabouts. Think the size of a scotch pancake!

Cook until bubbles appear on the surface of the pancake (usually about 45 seconds per side).

Put aside on a plate (you can pop them in the oven on a low heat if you want to keep them warm).

Then when you’ve cooked up all your batter mix, spread each pancake with a little Nutella; a heaped teaspoon is usually enough for two pancakes.

Finally, sprinkle with nuts and fruit — and dig in!

So there we have it; the best way I can think of to start the day.

I wonder — back in 1949 —if Mr Ferrero had any idea that families would still be enjoying his creation, many years into the future? I’m sure he’d be delighted.

But one thing is for certain; these pancakes are a sure-fire way of putting a happy, chocolatey smile on everyone’s face in a morning.

I’ve made a little film to go with the post, so you can see exactly how I make the pancakes. Go and have a little look!