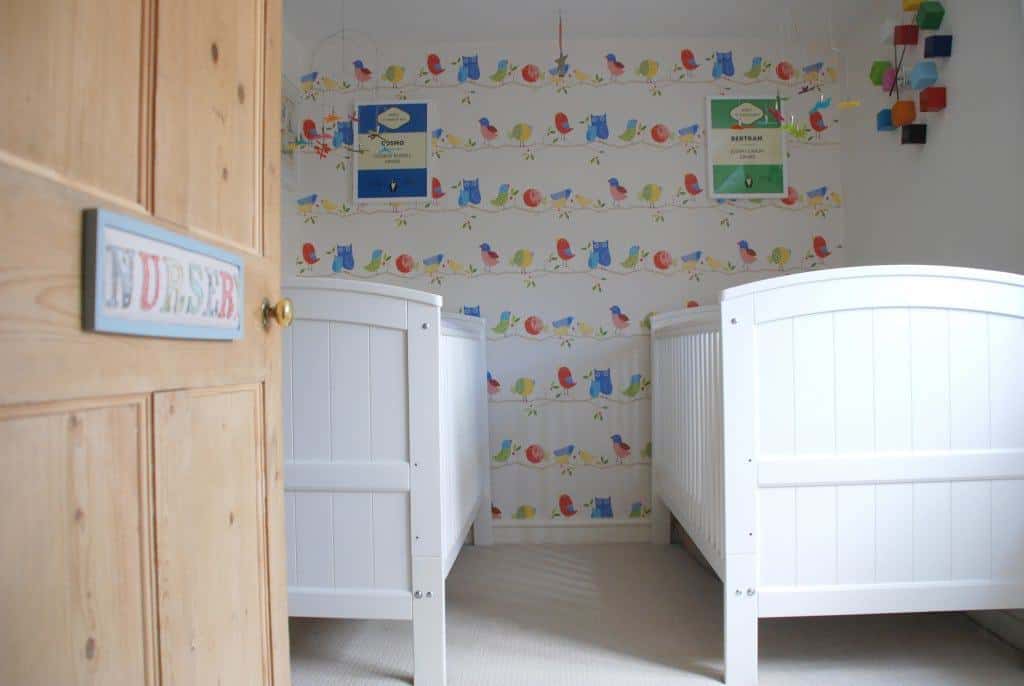 When I was pregnant with twins, we chose not to find out the sex of the babies.

Quite a lot of people do these days but it was our choice not to. At the end of the day, I was so thrilled to be pregnant, I couldn’t have cared less what sex they were and didn’t need to know until the day I met them. Ultimately, it was two babies. And that’s all that mattered.

The knock on effect of this was that we had to be a little more creative with how we decorated the twins nursery. We were careful to choose a scheme that suited both sexes; even if it was one of each! Had I known we were expecting boys, perhaps there would have been a little more blue in the mix? Or if my little passengers had been girls, potentially I would have gone a little crazy with pink. Who knows?

I’m so glad we didn’t know. Because as well as a lovely surprise at the end of my pregnancy, we also ended up with a lovely, fresh, unisex room which is perfect for the two little people that now reside in it.

We kept the bones of the room very neutral; painted the walls white, added blackout blinds and white curtains.

But to give the room a lift, we used wallpaper on the wall next to their cots — which faces the door — and on the large wall at the end of the room,  which houses the changing station. The wallpaper is by Harlequin and is called ‘What a Hoot’. There are 3 colour options but we chose the Marine, Strawberry and Apple colourway.

I LOVE the bright colours plus it’s perfect for boys and girls,  which was pretty important when we were choosing how to decorate our nursery.

The cotbeds were from Mamas and Papas.

They are ‘Hayworth’  — white painted wood — which meant that they went really well with a sideboard we already had.

We used this as a changing station,  instead of buying a purpose made one. It’s got lots of storage for nappies and all the other paraphernalia that two small humans need; pop a changing mat on the top of it and it’s the perfect changing table.

The mirror on top of the unit was being thrown out by a friend and had a dark wood frame originally.

A quick lick of white eggshell was all it needed to tie it into the room. Also, placing a mirror opposite a window is a great way to bounce light around and make a dark corner lovely and bright.

To give the floor a bit of life we added a rug from The Great Little Trading Company and hung various bits of colourful artwork on the walls, in white frames from IKEA.

I’ve had the  MOOKS letters for years! They were from Anthropologie in New York and used to hang in my office.

I designed the book cover prints — these are now available to buy from my Not On The High Street pages — and the Queen’s head artwork was a wedding present from our best friends.

Although it’s not a kids print,  the bright colours work well with the rest of the room and,  as the boys get older,  it’s something that  they won’t grow out of.

Very often nurseries are so geared up to tiny babies, that when the child reaches the toddler years, the decor is already too young — and uninspiring — for them.

If you’re nervous about injecting colour to a room, a great way of doing it is just by adding a pop of colour with accessories.

Brightly coloured art,  rugs or even a shelf full of lovely bright books is sometimes all that’s needed to give a room a splash of colour.

Plus, when it’s outstayed it’s welcome — or you fancy a change — it’s an easy way of changing things without having to totally redecorate.

The boys are lucky enough to have a huge double wardrobe in their room for their clothes — which we store in boxes — and on the handles are hung two little stars which they were given for their naming day.

They’ve also got a shelf for their dinosaur collection — which seems to be constantly growing — and underneath are some hooks,  which we found in our very first home and have taken with us wherever we live. It’s an original 1950s design; a metal frame with coloured knobs,  which ties in with the room so well,  plus it’s great for hanging  up their coats and other bits and pieces.

Finally, they have a colourful — do it yourself — clock on the wall by Karlsson and mobiles hanging above each bed. When they were born I went on a mission,  looking for baby mobiles,  but didn’t manage to find any I liked.

They were all so dull and uninspiring!

In a desperate attempt to create the kind of thing I had in my head, I made the boy’s mobiles from two wire photo hangers.

They have little clips at the end of each arm and are generally used for displaying little photographs but I bought some felt shapes and hung those from the clips instead. They’ve worked so well! When they were very tiny, they would lie for hours and stare at the shapes.

Now they’re older, they just add a nice bit of decoration to the room.

It’s good to know that you’re getting your money’s worth out of something!

Often, things that are sold purposely for the nursery are such a waste of money as,  once they’ve outgrown their purpose, you find you just don’t need them anymore.

Once the boys are out of nappies, their ‘changing table’ will go back to being a sideboard and probably move to another room.

When they’ve outgrown the mobiles, I’ve decided to get some mini polaroid style prints created — of our friends and family — and hang those up in their room instead. 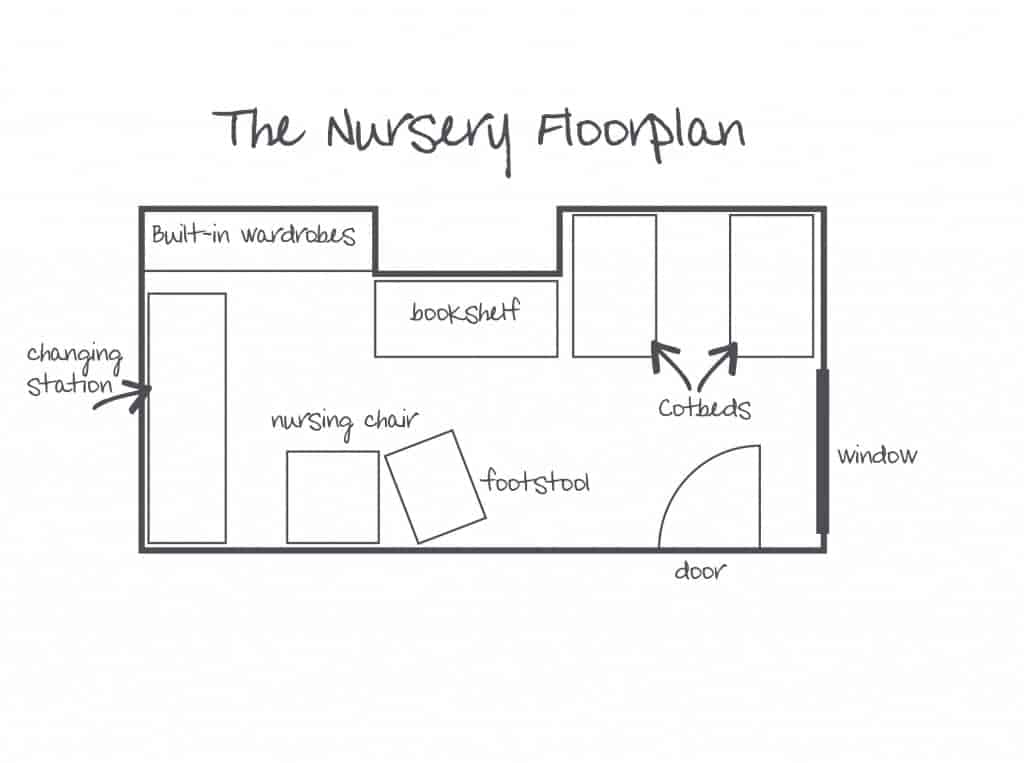 So there it is. The room for the smallest members of our family! It will change and evolve as they get older,  I’m sure,  but for now it’s the perfect space for them.

They sleep well, that’s for sure, and if their room is a contributing factor for that, then we’ve done pretty well!

That said, I am dreading the day that we change the cots into beds and the boys won’t be restrained any longer!

Perhaps the days of our nice calm bedtime routine will be over?

Once things for sure, I’ll be looking at lovely new bed linen to dress the beds! ;)

64 thoughts on “Our Happy Home | The Twins Nursery Tour”