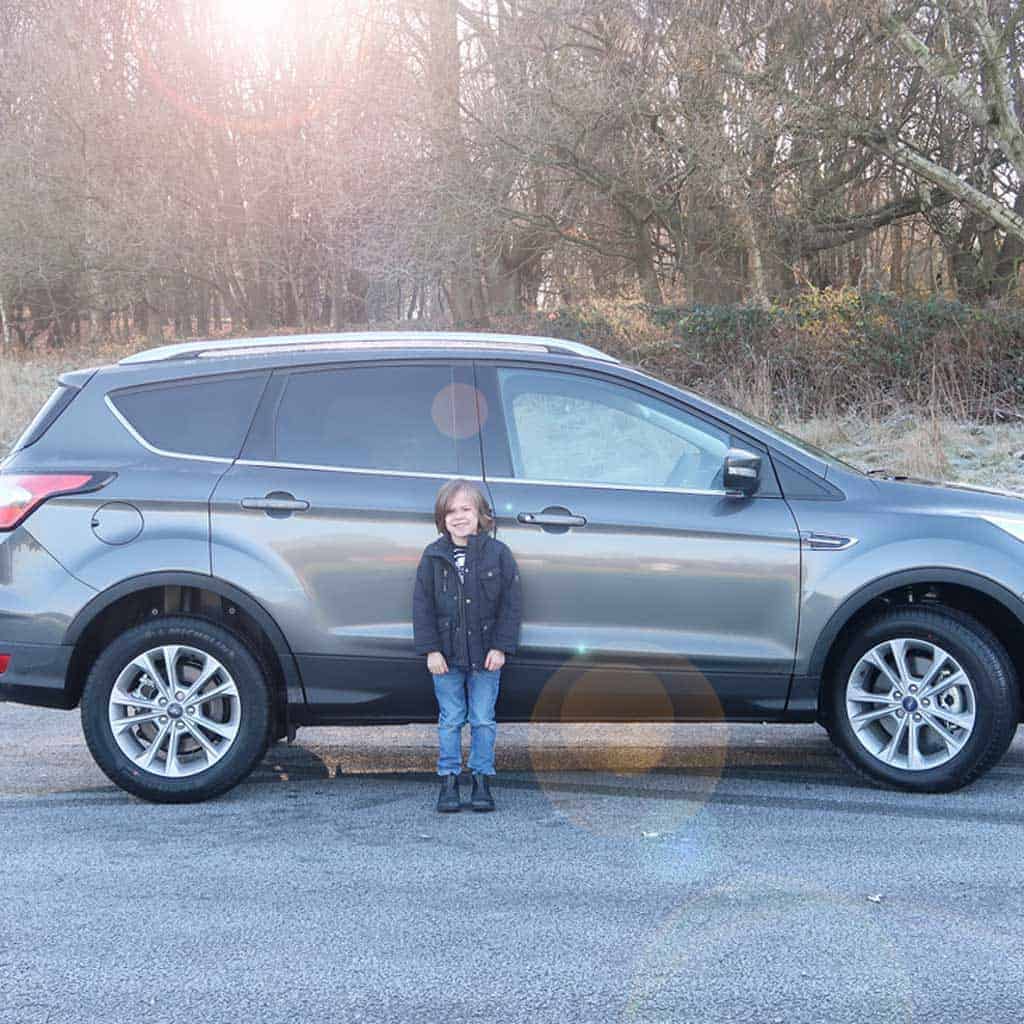 ‘This honest ford Kuga review is in paid partnership with Vertu Motors. However all thoughts, words and images are entirely my own.’

Although we’ve never pushed gender specific toys on the twins — always offering them a choice — like an inherent magnet, they’re inexplicably drawn to cars and trains.

Ever since they were very tiny, they’d choose diggers over dolls; or spend hours playing with their little cars or wooden train-set.

My little apples certainly haven’t fallen too far from the family tree though; their dad is equally mad about cars and trains.

Lucky then that, last weekend, we were able to kill two birds with one stone and give all three of my boys a bit of a treat.

Big Boys and Their Toys

We were asked by the lovely folk at Bristol Street Motors Ford if we’d like to test drive a Ford Kuga for the week.

We’ve reviewed a few cars in the past — a Nissan Leaf, an electric BMW i3, and more recently a Land Rover Discovery Sport — but I’ve never driven a Ford before, so I was very excited to put the Kuga through it’s paces.

And so, it seemed, was my big man-shaped boy.

But wouldn’t you be tempted; with a face like this?

The Kuga is a great family car.

It’s not quite as large our Discovery Sport but it’s still a really good size and we had no problem fitting all our weekend clobber in the boot.

It was a really comfortable ride — plenty of room for a growing family.

We road-tested a 2L manual diesel which — as well as being a lovely car to drive — is perfect for adventuring families like ours; as the diesel engine gives better fuel economy than it’s petrol counterpart.

The state of the art Ford engine has much lower emissions than old fashioned diesel engines too so, as well as being kinder to your monthly out-goings, it’s much more gentle on the environment too.

The Kuga had a fantastic in-car computer, offering a brilliant sat-nav (which I felt was much better than the one in our own car to be honest) plus Bluetooth compatibility, which meant we could hook our phones up to the audio, and listen to Spotify through the surround-sound speakers.

We’d decided to take the Kuga up to my parents’ home for the weekend; it’s just far enough to really test the car out and get a feel for it.

We drove up on the Friday night; with the Kuga making light work of the journey.

The miles don’t seem quite so long when you’re travelling in comfort.

Dickie, the twins and my dad all went on a boys’ outing in the Kuga —as there was a model railway exhibition on at the nearby County Showground.

I’ve always been a bit of a petrol-head but I’ve never really seen the fascination with trains; so my mum and I bid them a fond farewell and stayed cosy indoors.

(Albeit, I think the two big boys loved slightly more than the two little ones!)

The little houses and people were even smaller than the ones we saw at Bekonscot.

Cosmo looks vaguely unimpressed in some of the photos — although his daddy assured me that he was having a brilliant time; he was just cold.

Needless to say, the four of them came back bursting with enthusiasm about the model railway; regaling my mum and me with tales of the tiny people, in their the minute landscapes; and the little steam train they’d ridden on.

I just smiled and nodded at this point.

Boys and their toys eh?

It just goes to show that — big or small — boys love playing with cars and trains.

Thanks you to Vertu Motors for letting us to test drive the Ford Kuga.

This is a paid post but all thoughts, words and images — as ever — are entirely my own.