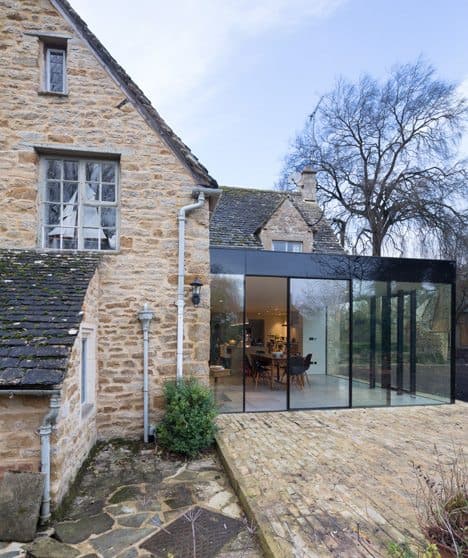 I’ve mentioned before that our home is listed.

The main part of it was built in the 17th century with a shiny new extension added in 1890 (modern hey?!).

But even though it could really do with being dragged into the 21st century, extending a listed building is easier said than done.

That said, 15 years or so ago the previous owners managed to get planning approved for a conservatory.

Wooden framed — and a decent size — it’s turned the house into an L shape.

We currently use it as our ‘smart’ sitting room; basically a child-free room that isn’t strewn with an assortment of plastic toys and stuffed animals.

I *like* the conservatory (the space but not the look of it) but what I really want to do is knock the whole thing down and rebuild across the whole of the back of the house.

It’s freezing in the winter and like an oven in the summer. It just doesn’t serve it’s purpose.

But I don’t want our extension to look like it was built in the 1600s either — a pastiche of the era — I want it to look super modern but still tie in with the existing building.

Not too much to ask eh?

It is a big ask — and a BIG job — but I’ve been trawling the internet and there are some gorgeous examples that make me think it could work beautifully.

A Room With a View

One thing’s for sure.

If we did knock down our existing conservatory and replace it with something fabulous, I’d *definitely* have plenty room for the dream kitchen I’ve been banging on about!

Editor’s note: Since this post was written, we managed to get planning permission passed. Plus listed building consent on our Grade 2 listed cottage. You can read all about it here.

54 thoughts on “Extending a Listed Building”